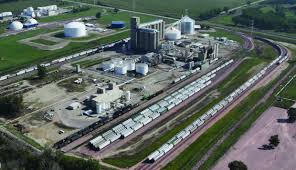 SIOUX CITY – The scope of Ag Processing Inc. expansion at its complex near Sergeant Bluff is growing, rising to nearly $130 million through a new second piece. A year ago, plans to build a $90 million vegetable oil refinery were unveiled. At the time, the Woodbury County Board of Supervisors and the Development Authority Board  approved a package of financial incentives to help finance that project, which is under construction. At a meeting Friday in Des Moines, the IEDA board is expected to approve an additional $308,000 in incentives to support AGP’s latest project — $38 million expansion of its methyl ester Port Neal plant, just south of Sergeant Bluff.